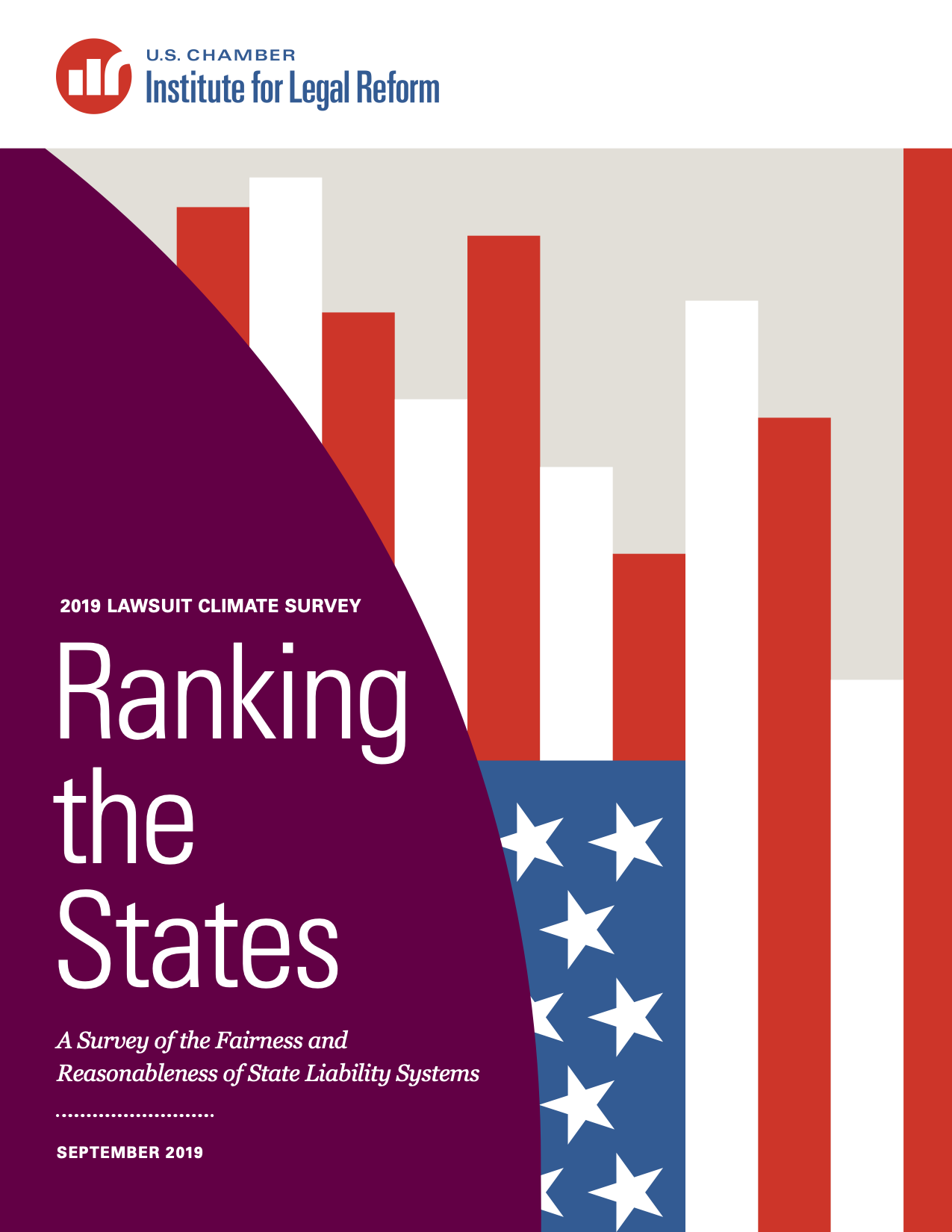 The 2019 Lawsuit Climate Survey: Ranking the States was conducted for the U.S. Chamber Institute for Legal Reform by The Harris Poll to explore how fair and reasonable the states’ liability systems are perceived to be by U.S. businesses. These perceptions matter because they can be influential in business decisions about where to conduct/expand/constrict business operations or sales. A record high number of respondents in this survey (89%) report that a state’s litigation environment is likely to impact important business decisions at their companies, such as where to locate or to do business. This number has increased over time, up from 85% in 2017 and 75% in 2015.

Participants in the survey were comprised of a national sample of 1,307 in-house general counsel, senior litigators or attorneys, and other senior executives at companies with at least $100 million in annual revenues who indicated they are: (1) knowledgeable about litigation matters at companies; and (2) have first-hand litigation experience within the last five years in each state they evaluate. The 2019 ranking builds on previous years’ work where in 11 prior surveys (2002) all 50 states were ranked by those familiar with the litigation environment in that state.

Respondents were first screened for their familiarity with states, and those who were very or somewhat familiar with the litigation environment in a given state, were then asked to evaluate that state. It is important to remember that courts and localities within a state may vary a great deal in fairness and reasonableness. However, respondents had to evaluate the state as a whole. To explore the detailed nuances within each state was beyond the scope and purpose of this study. Other studies have demonstrated variability within a state. For example, several studies have documented very high litigation activity in certain county courts such as Cook County, Illinois, and Jefferson County, Texas, revealing that these counties have “magnet courts” that are extremely hospitable to plaintiffs. Thus, it is possible that some states received low grades due to the performance of one or two of their counties or jurisdictions. Conversely, state evaluations could also have been raised by city or county court systems that perform very well.

The survey broadly focuses on perceptions of the state liability system by asking respondents to grade the following areas:

Respondents assigned grades of A, B, C, D, or F to each of these elements. The rankings were developed from these grades.

*Note: Due to changes in overall ranking criteria in 2017, the 2019 scores do not provide an exact apples-to-apples comparison to years prior to 2017; however, prior scores are provided for historical reference.