It’s not easy to define “harm,” at least when it comes to federal litigation. But just over a year ago, the U.S. Supreme Court unequivocally prohibited no-injury lawsuits with its ruling in TransUnion v. Ramirez, requiring plaintiffs to show concrete real-world harm to establish the “standing” necessary to bring a federal lawsuit. That decision was years in the making. ILR’s newest white paper, TransUnion and Concrete Harm: One Year Later, dives into the case and its consequences, and provides important historical background.

As we wrote in a previous blog, the Court initially attempted to prescribe a clear concrete harm standard  with its 2016 decision in Spokeo v. Robins. It held that a plaintiff must allege a concrete injury – something “real, and not abstract” that resulted in more than a “bare procedural” harm – to meet the U.S. Constitution’s basic standard for bringing a federal lawsuit. Unfortunately, plaintiffs’ lawyers muddied the waters by convincing a succession of lower courts that a statutory violation on its own was enough to demonstrate concrete harm. Recognizing the confused landscape around this fundamental constitutional question, the Court granted review in TransUnion.

The underlying litigation in TransUnion raised the same core issues as Spokeo. In 2012, Sergio Ramirez sued credit reporting agency TransUnion on behalf of a class of over 8,000 individuals, alleging two violations of the Fair Credit Reporting Act (FCRA). First, Ramirez claimed that TransUnion had not used reasonable procedures to ensure class members’ credit files contained accurate information. When someone with the same name as Ramirez was added to a list of individuals believed to threaten national security maintained by the U.S. Treasury Department’s Office of Foreign Assets Control (OFAC), TransUnion included a statement in Ramirez’s credit report that he was a “potential match” for the list. The company also sent Ramirez mailings to inform him about the issue, but Ramirez claimed these mailings did not comply with the format requirements laid out in the FCRA.

At first glance, the elements of this litigation seem more clear-cut than those presented by Spokeo. Ramirez found out about the potential OFAC match only when he attempted to purchase a car and had difficulty getting a loan—and was told about the match in front of his wife and father-in-law. He then canceled a planned vacation out of concern over the alert. But while the harms claimed by Ramirez intuitively made sense, those asserted for many of the class members were much less clear. No other class member submitted evidence of harms like those Ramirez experienced. And only 1,853 of the 8,185 class members had credit reports disseminated to a potential creditor that referenced a “potential” OFAC match. Regardless, the district court certified the class and ruled that each of its 8,185 members met the standard for standing for both categories of FCRA claims, and a jury subsequently returned a verdict in favor of the entire class on both claims. The Ninth Circuit affirmed this outcome on appeal, asserting that the mere presence of an alleged inaccuracy on the class members’ credit reports created a risk of future harm sufficient for standing. TransUnion then sought review in the Supreme Court.

The Court took up the case and reversed the Ninth Circuit in a 5-4 decision. The Court held that only plaintiffs and class members who are concretely harmed by a statutory violation have standing to pursue a claim in court. Specifically, it reaffirmed its reasoning in Spokeo that a plaintiff must establish a concrete injury and clarified that every class member in a class action—not just the named plaintiff—must satisfy this requirement to recover damages. The Court also provided guidance on what makes a claimed injury sufficiently concrete. Applying this reasoning to the claim based on the alleged inaccuracy, the Court held that Ramirez and the 1,853 class members whose OFAC listing TransUnion had communicated to creditors had standing. But the Court held that a speculative risk of future harm alone is not enough to demonstrate an injury in fact, so the other 6,332 members of the class did not meet the standard.

For the other FCRA claim about the format of TransUnion’s mailed notices, the Court held that only Ramirez—not the class—had standing. The Court’s reasoning for that second decision was straightforward: no class member alleged any harm stemming from the inaccurate formatting. As the Court pithily put it: “No concrete harm, no standing.”

ILR’s paper explains that the impact of TransUnion has been swift and profound. In the year following the decision, the Court’s ruling was cited in over 570 federal court decisions, including over 80 appellate decisions. Most lower courts have followed the Supreme Court’s reasoning closely, rejecting interpretations of Spokeo inconsistent with TransUnion and curbing no-injury lawsuits. While the plaintiffs’ bar will seek to convince courts to improperly apply the concrete harm test, the Court has shown twice now—with Spokeo and TransUnion—that it is prepared to step in and correct courts when they give the wrong answer to that fundamental constitutional question: what is harm? 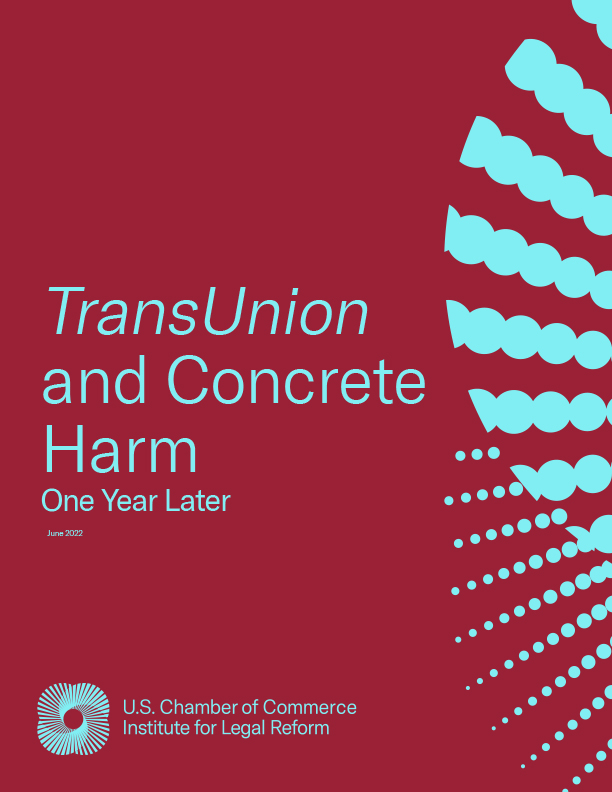