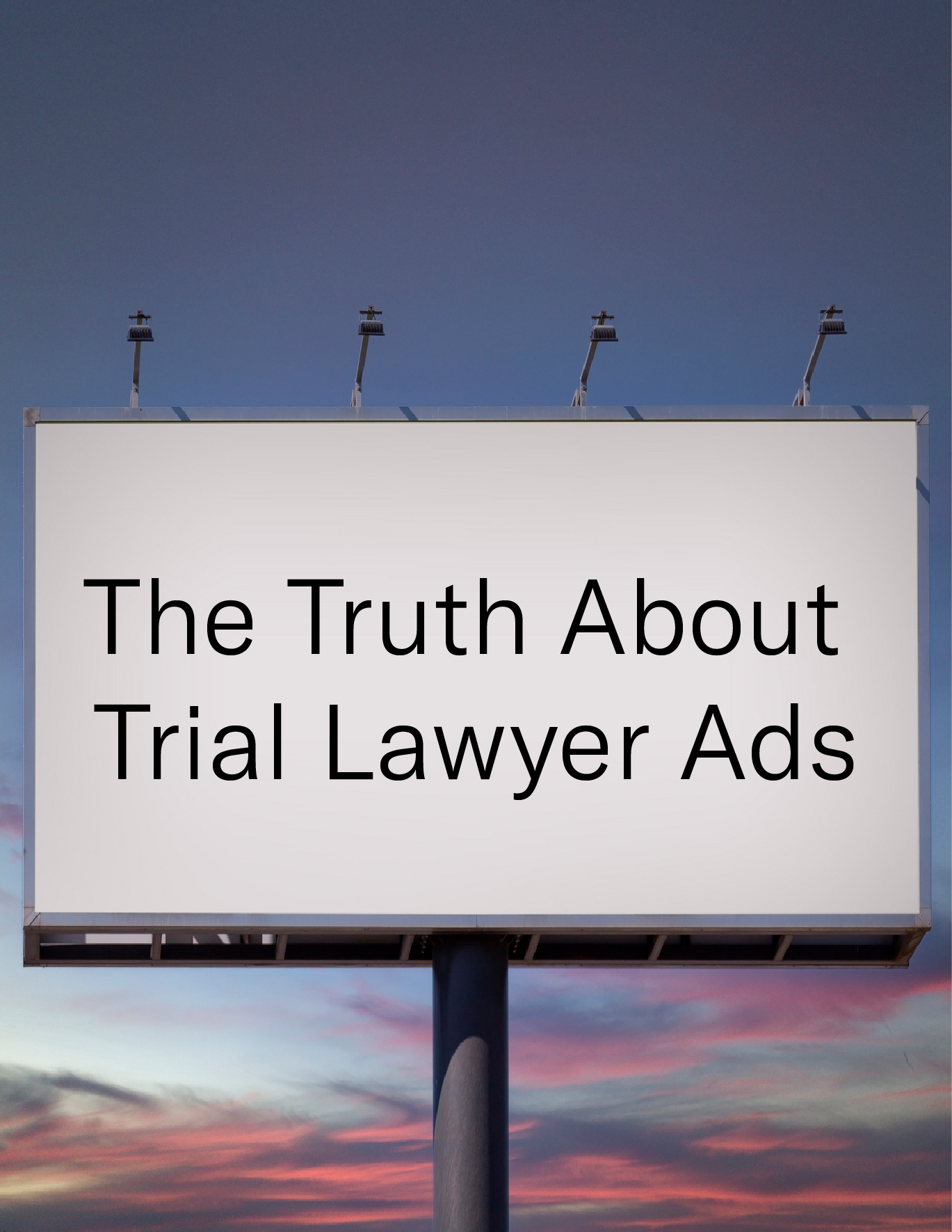 On your next road trip, instead of playing the license plate game try out a new one – count the number of lawyer billboards you pass. You might be surprised how many are out there. These trial lawyer ads often ask if you have been injured or tout grand claims of cases that resulted in millions or even billions of dollars in awards to victims. The ads, which are designed to grab your attention and generate new business, are far from the full story.

The San Antonio Report recently published an opinion piece about a lawyer billboard getting a lot of attention in Texas. Attorney Thomas J. Henry advertised his $1.25 billion “verdict/judgment” for a “sexual assault to a minor” on a billboard. What the billboard does not tell you is that the victim received no money, and no attempts to collect the judgment were made. According to the victim, Henry wanted him to be in a television commercial for his law practice. After the victim declined, he was informed that his case had been closed, and Henry’s firm did not take any action to enforce the judgment.

The truth about trial lawyer advertisements is that they often give a false impression. Trial lawyers might win high awards in some cases, but that does not mean the victim receives any of that money.

Billboards are not the only place trial lawyers advertise. According to an ILR study, “Plaintiffs’ lawyers, companies that specialize in advertising and gathering claims (known as ‘lead generators’), and third parties that finance the litigation spend about $1 billion on television advertising each year to seek plaintiffs for mass tort litigation.” You have likely seen many of these commercials on TV. They run the gamut of topics from prescription drugs to talcum powder, to pesticides, and more. For example, plaintiffs’ law firms and lead generators spent an estimated $122 million to air about 375,000 lawsuit ads targeting the blood thinner Xarelto between 2014 and 2019.

The research shows that large spending on lawsuit advertising does not correlate with whether a product is safe. Instead, the ads fluctuate based on what lawyers think will bring the most business during a specific period. This kind of advertising is often designed to fuel the number of cases involved in mass tort litigation. It’s meant to bully companies into global settlements, even when the product at hand did not cause the illnesses or injuries alleged in the lawsuits, by damaging the product’s and/or the company’s reputation.

Trial lawyer ads on television often play intense music, have a dramatic voice-over, and use official-sounding language like “drug alert.” These convincing commercials can discourage people from seeking treatment from a doctor or scare them from taking doctor-prescribed medications.

Hear from two Louisiana medical professionals on how trial lawyer advertising has affected their patients in this video.

Again, the truth about trial lawyer advertisements is that they’re designed to fuel lawsuits through often misleading, fearmongering ads. Businesses are inundated with lawsuits created through these ads, call centers, and a network of law firms. As cases mount, they can be pressured to settle due to the cost of never-ending litigation, the risk of liability, and damage to their reputations. While the First Amendment protects attorney advertising, legislators and regulators can and should step in when ads mislead the public or jeopardize public health.

Some states are already taking action against misleading lawyer ads. Remember Thomas Henry? His $1.25 billion billboard was so egregious that many speculate it was what finally pushed the Texas Supreme Court to put its foot down. On January 31, 2022, the Texas Supreme Court handed down a decision amending the rules for Texas lawyers who use advertisements for their services. The ruling states, “A communication about legal services may be misleading because it omits an important fact or tells only part of the truth. A lawyer who knows that an advertised verdict was later reduced or reversed, or never collected, or that the case was settled for a lesser amount, must disclose the amount actually received by the client with equal or greater prominence to avoid creating unjustified expectations on the part of potential clients. A lawyer may claim credit for a prior judgment or settlement only if the lawyer played a substantial role in obtaining that result.”

Texas took a step in the right direction here, but more states need to enact similar laws to protect the public from misleading trial lawyer ads. It is irresponsible to scare people into stopping their medications or try to lure them with windfall recoveries that never actually make it into victims’ pockets. In far too many cases, clients see little to no money from mass torts and class actions, while lawyers pocket millions.

So, the next time you’re counting trial lawyer billboards on a road trip or watching a lawsuit ad on television, know that you likely are not receiving the full story. The truth about trial lawyers is that first and foremost, they design their ads to generate business. They are concerned with their pay day, not yours.