by Tom Donohue, President and CEO, U.S. Chamber of Commerce 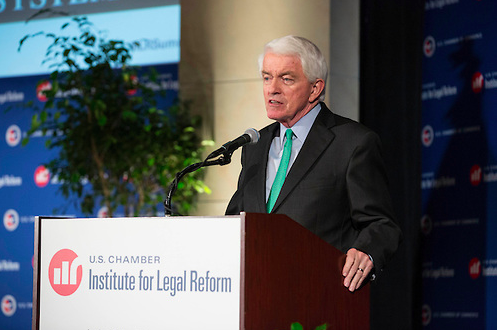 That’s what it’s been like fighting the trial bar. For 15 years, the U.S. Chamber Institute for Legal Reform (ILR) has been waging an entrenched battle against a handful of trial lawyers who are trying to suck the vitality out of companies large and small—and our economy.

We started ILR to fight for a faster, simpler, and fairer legal system. We recognized that a rising tide of lawsuits was sinking the economy. We noticed how certain members of the trial bar were gaming a flawed legal system, destroying jobs and economic opportunity in the process.

Given the power and wealth of the trial bar, we’ve had more than our fair share of successes. We’ve helped rein in frivolous class actions through passage of the Class Action Fairness Act. We’ve successfully pressured states to reform their legal systems. And we’ve systematically exposed the underhanded, and sometimes illegal, tactics of a handful of trial lawyers.

Still, 15 years later America has the costliest legal system in the world. The total tort liability price tag for small businesses, for example, is an astounding $105 billion annually. Frivolous lawsuits remain a serious drag on our economic recovery and undermine true justice for legitimate victims.

This proves that the trial bar is resilient and innovative, constantly pursuing an agenda of more lawsuits and huge paydays. And it is pursuing that agenda in multiple ways—by inserting lawsuit-creating provisions in congressional legislation and government regulations, attempting to export U.S.-style class action suits abroad, attacking arbitration, and financing lawsuits all over the world.

The trial bar’s dogged pursuit of lawsuits will never change, which means we need to keep fighting. The threat of lawsuits increases uncertainty, stifles investment and hiring, and even bankrupts some companies.

We all talk about gridlock and inaction in Washington, and we should. But across this country there is gridlock created by a legal system run amok. We need a better balance. We must always have recourse and redress in the courts with speedy commonsense justice where disputes are quickly settled and the truly wronged are compensated. No one, however, could argue that’s the system we have today.

There is a compelling need to continue to fight for reform at all levels, challenge an overreaching trial bar at every turn, and make sure that we can, indeed, become a nation of builders, doers, and problem solvers again—rather than a nation that spends most of its time in courts, filing briefs and pushing paper.