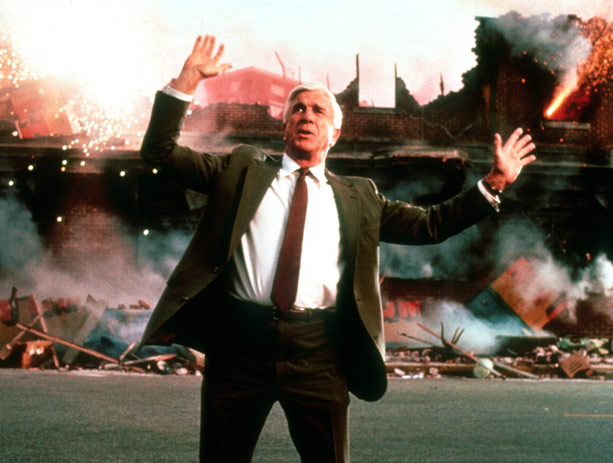 Those are the words of the hapless Lt. Frank Drebin in the iconic movie, The Naked Gun, as he feebly attempts to distract bystanders from the fireworks factory exploding right behind him.

But, where America’s asbestos litigation crisis is concerned, it’s a plaintiffs’ lawyer tactic that is anything but a laughing matter.

Specifically, this “nothing to see here” strategy is being used to attack a common-sense piece of legislation: The Furthering Asbestos Claim Transparency (FACT) Act (H.R. 942).

There is a growing body of evidence that some plaintiffs are defrauding the asbestos bankruptcy trust system to the point that there may not be enough money left to pay future victims. This secret, opaque system, run largely by some of the very same plaintiffs’ lawyers who collect fees from it, is wired for abuse.

The FACT Act would help fight fraud in the asbestos bankruptcy trust system — something the plaintiffs’ bar claims doesn’t exist.

Meanwhile, “great red flags of fraud” and abuse are being uncovered across the country — leaving the plaintiffs’ bar to look an awful lot like Lt. Drebin, with the fireworks exploding behind them.

The federal government set up the system of asbestos bankruptcy trusts because almost 100 U.S. companies have been forced into bankruptcy due to asbestos litigation. Currently, the assets of these trusts total about $18 billion.

The purpose of the trusts is simple — prevent further damage to the economy, while ensuring that asbestos victims are justly compensated.

Rampant abuse of the trusts, however, threatens justice for these victims, as well as the integrity of the entire system.

Take, for instance, the recent case of a Baltimore asbestos lawsuit (Luther Beverage, et all, v. ACandS, INC., et al.), in which one of the defendant companies, CertainTeed, filed a sanctions motion against the Law Offices of Peter Angelos. According to the motion, the Angelos firm claimed during a 2009 trial that their client was exposed to asbestos from only three companies, but, within days of losing the lawsuit, started filing claims against 23 other companies through their asbestos bankruptcy trusts claiming the client’s asbestos-related disease was caused by the products of these other twenty-three.

According to CertainTeed in its brief, the Angelos firm’s litigation strategy for its client “was to handicap his opponent with a story corrupted by half-truths and lies to maximize the odds of recovering a significant damages award at trial while keeping the bankruptcy trusts in his back pocket.”

The Angelos firm responded that the accusations were “baseless” and that the claims were filed “in the unlikely event that additional evidence would come to light establishing” the plaintiff’s “presence at a job site where a bankrupt entities asbestos-containing products were in use.” The firm withdrew the claims after the sanctions motion was filed and said no fraud was committed because 22 of the 23 bankruptcy claims were never paid.

Just because none of these 22 claims was ever paid, however, doesn’t mean harm was not done in filing claims for which you had no evidence.  In fact, this case provides insight into the strategy employed by a select group of plaintiffs’ attorneys who are gaming the asbestos bankruptcy trust system — at the peril of true asbestos victims and American companies.

In March 2013, the Wall Street Journal also took a closer look at the asbestos bankruptcy trusts, reviewing the trust claims and court cases of almost 850,000 people filed since the late 1980s. They found that thousands of cases of allegedly fraudulent and conflicting claims.

For example, the Journal found that more than 2,000 applicants to the Manville trust said they were exposed to asbestos working in industrial jobs before they were 12 years old.

They also reported on the case of an employee of a California law firm that filed a claim with a trust in the name of someone who didn’t even exist.

The Journal found these thousands of questionable and abusive claims even though they had the records of just one trust.  The rest are secret. While some are caught, many more aren’t, which means that the trust money is slowly but surely dwindling.

This is where the FACT Act comes in. The bill would require that the asbestos bankruptcy trusts disclose on a quarterly basis all claims and exposure allegations and cooperate in providing third-party discovery in tort actions.

It’s as simple as that.

Of course, the legislation would threaten the profits of the billion-dollar asbestos lawsuit industry. But every dollar saved by closing the door to fraud is a dollar that can go to the actual victims of asbestos exposure instead of lawyers.